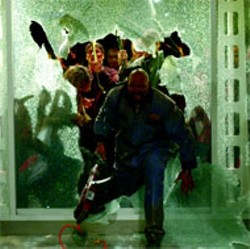 BATMAN BEGINS One of the finest superhero films ever made, Batman Begins marks the beginning of a beautiful friendship - between the creative forces who have resurrected a popular franchise and the fans who felt betrayed when that same franchise went belly-up in the late 90s. Never afraid to peer into the darkest recesses of the mind, director Christopher Nolan (Memento, Insomnia) has created a brooding picture that has as much in common with his previous works as it does with the storied saga of the Caped Crusader. To dismiss this as escapist fare would be to ignore the myriad adult themes that bulk up the picture, issues ranging from the duality of man to the politics of fear. Christian Bale leads a sterling cast that also includes Michael Caine, Morgan Freeman and Liam Neeson; their committed performances help make this that rare summer movie in which thought often speaks louder than either action or words.

BEWITCHED As far as ill-advised Nicole Kidman vehicles that plunder past artifacts of pop culture are concerned, the nicest thing one can say about Bewitched is that it's an improvement over The Stepford Wives. That's primarily because of Kidman herself, who manages to harness her maddeningly inconsistent role with such success that the result is an offbeat and original characterization. Otherwise, this initially clever comedy, in which a real witch (Kidman) is cast as a fictional one on an update of the Bewitched TV series, takes one wrong turn after another beginning around the halfway mark. As Kidman's unlikely love interest, a miscast Will Ferrell delivers a manic performance that quickly grows tiresome, while old pros Michael Caine and Shirley MacLaine are wasted in malnourished roles.

HERBIE: FULLY LOADED The notion of a supercharged Volkswagen beetle seems quaint in this age of monolithic, gas-guzzling SUVs - indeed, the first Herbie picture, The Love Bug, hit theaters back in 1969 - yet given the sort of cacophonous kiddie dreck that routinely fills auditoriums today, this blast of old-fashioned sentiment isn't half-bad. Lindsay Lohan, whose tight outfits continually threaten to put the kibosh on the film's G rating, plays a speed racer who finds herself competing on the NASCAR circuit after she discovers that the rusty VW she rescues from a junkyard is magically endowed. The wavering quality of the special effects - more special in some scenes than others - will pass unnoticed by the little ones, while parents will enjoy revisiting their youth via the mix of rock oldies on the soundtrack.

THE HONEYMOONERS The classic 1950s TV sitcom gets refitted for a 21st century big-screen excursion, but unfortunately, it's the audience who gets it right in the kisser. The plot centers on the efforts of irascible Ralph Kramden (Cedric the Entertainer) and his dim-witted friend Ed Norton (Mike Epps) to raise enough money to put a down payment on a duplex coveted by their wives (Gabrielle Union and Regina Hall). To make that dream a reality, Ralph invests their savings in dubious schemes involving an abandoned train car and an abandoned mutt. One character makes a crack about The WB, which in all honesty is where this feeble film belongs. Forget Jackie Gleason's "To the moon, Alice" catchphrase - "To the video bargain bin" is more like it.

HOWL'S MOVING CASTLE American animated features, even the best of them, are invariably bound by tradition and convention, but the movies of Japan's Hayao Miyazaki remain free from the shackles of conformity. His films are a sight for soaring eyes, ocular treats for moviegoers on the prowl for new experiences and new sensations. His latest release is nowhere in the same league as his masterpiece, the Oscar-winning Spirited Away, but the visuals more than carry the film. This tale of a teenage girl who turns to a handsome wizard to help her break a spell incorporates Miyazaki's recurring themes of courage, sacrifice and environmental awareness, yet the results are too scattershot to make any lasting impression. Still, glitches in storytelling and stunt casting (Billy Crystal is jarring as the voice of a wisecracking fire demon) can't overshadow the wondrous sights that Miyazaki doles out for our approval.

LAND OF THE DEAD George Romero has always been as much a social commentator as a horror filmmaker, which is why his zombie flicks have always remained as popular with critics as with cultists. Two decades after his last foray into the genre, Romero has decided to add a fourth chapter onto his established trilogy; it's good, gory fun, even if its satiric jabs are more heavy-handed than in the past. This entry centers on a conscientious mercenary (Simon Baker) who has to contend with a ruthless CEO (Dennis Hopper) who caters to the wealthy while ignoring the unwashed masses, a hired gun (John Leguizamo) with his own agenda, and hordes of zombies who are starting to take baby steps up the evolutionary ladder. Romero's wit remains intact, but his allusions to modern-day America (Dennis Hopper's raging capitalist even states, "We do not negotiate with terrorists!") seem more obvious this time around.