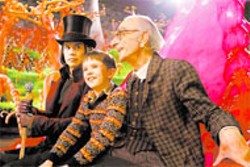 CHARLIE AND THE CHOCOLATE FACTORY Forrest Gump's mama famously declared that "Life is like a box of chocolates; you never know what you're going to get." You never know what you're going to get with Charlie and the Chocolate Factory, either, given that director Tim Burton tends to fluctuate between enfant terrible and rank sentimentalist. Burton, last seen lunging for Oscar gold with the forced whimsy of Big Fish, is back on steadier ground, helming the second screen version of Roald Dahl's 41-year-old novel. Johnny Depp headlines as Willy Wonka, the eccentric candymaker who allows five children to take a tour through his gargantuan factory. Young Charlie Bucket (Freddie Highmore, Depp's Finding Neverland co-star) is a perfect angel, but the other four kids prove to be such brats that they all eventually get their comeuppance within the walls of Wonka's candy-coated fortress. In most respects, this surpasses the previous screen incarnation, 1971's Willy Wonka and the Chocolate Factory: It's funnier, faster and more visually stimulating. But Burton's maudlin streak gets the best of him via a needless back story that explains Wonka's affinity for candy, and this plot strand leads to a soggy finale that's easily bested by the final act of the 71 model. Depp, whose Wonka seems to be a cross between Michael Jackson and The Cabinet of Dr. Caligari's somnambulist Cesare, delivers an engaging surface performance, though I prefer the more measured madness of Gene Wilder's interpretation.

MARCH OF THE PENGUINS It's awfully hard - maybe even impossible - to resist the charms of March of the Penguins, a documentary that's as single-minded in its approach as its protagonists prove to be in their determination to keep their species alive and kicking. Originally a French film filled with first-person - uh, first-penguin - narration (yes, it anthropomorphized the animals) and unorthodox pop songs, this has been refashioned for American audiences as a traditional documentary, with pleasant theme music on the soundtrack and soothing narration provided by Morgan Freeman. At the risk of sounding like a xenophobic clod who would endorse "Freedom fries," I have to say I approve of the changes - hearing a baby penguin exclaim the Gallic version of "Gosh, Dad, it sure is cold with all this ice!" would surely have made me cringe. Director Luc Jacquet and his crew deliver 80 minutes worth of compelling footage, focusing on the annual ritual that finds the emperor penguins embarking on a lengthy, perilous journey to the spot where they'll hook up with mates and then protect the resultant eggs from the punishing elements. The French are apparently second to none when it comes to making movies that champion wildlife, and March of the Penguins joins Winged Migration, The Bear and Two Brothers as sterling examples of the form.

WEDDING CRASHERS Modern movie comedies are starting to resemble nothing so much as the board game Clue, with its limited number of characters rotating throughout the confines of an established milieu. Is it Ben Stiller and Owen Wilson in the Christmas comedy about an eccentric family? Is it Stiller and Vince Vaughn in the summer comedy about an underdog sports team? Is it Stiller, Wilson and Will Ferrell in the fall comedy about the fashion models? Or is it Stiller, Wilson, Vaughn and Ferrell in the spring comedy about a pair of TV cops? Wedding Crashers shuffles around Wilson, Vaughn and one "surprise" cameo player in just the sort of picture we've come to expect from this Hollywood version of a theatrical repertory company: rude, ragged and funny more often than not. Wilson and Vaughn play John and Jeremy, longtime buddies who crash weddings in order to sleep with the emotionally vulnerable women they encounter there. But the pair's successful operation hits a snag once they infiltrate a wedding that's under the auspices of Treasury Secretary William Cleary (Christopher Walken): John falls in love with Cleary's level-headed daughter Claire (Rachel McAdams) while Jeremy finds himself being terrorized by the politico's seemingly psychotic daughter Gloria (Isla Fisher). While it could be construed as a tragedy if Hollywood has already started steering McAdams (Mean Girls, The Notebook) into standard "girlfriend" roles, it should be noted that her vitality and Fisher's zaniness match up nicely against the leading actors' personalities. For their part, Wilson and Vaughn are in exemplary comic form, doing their best to lift a clunky screenplay that's bogged down by the usual stock characters (overbearing fiancé, creepy gay kid, etc.).

BATMAN BEGINS One of the finest superhero films ever made, Batman Begins marks the beginning of a beautiful friendship - between the creative forces who have resurrected a popular franchise and the fans who felt betrayed when that same franchise went belly-up in the late 90s. Never afraid to peer into the darkest recesses of the mind, director Christopher Nolan (Memento, Insomnia) has created a brooding picture that has as much in common with his previous works as it does with the storied saga of the Caped Crusader. To dismiss this as escapist fare would be to ignore the myriad adult themes that bulk up the picture, issues ranging from the duality of man to the politics of fear. Christian Bale leads a sterling cast that also includes Michael Caine, Morgan Freeman and Liam Neeson; their committed performances help make this that rare summer movie in which thought often speaks louder than either action or words.