Local artists use exhibit to as a platform for discussion

Black boy. Lost in the dust and found in the heavens." – Hypnotic Brass Ensemble

"Digestible art." That's how local artists Marcus Kiser and Jason Woodberry describe the contents of their latest exhibit, Intergalactic Soul, at Harvey B. Gantt Center for African-American Art + Culture. During the exhibit's July opening they gave their spiel on the need for nutritious, but not necessarily popular, veggies like broccoli and desire for sweet, scrumptious desserts like cheesecake. Their collection is, metaphorically speaking, "broccoli that tastes like cheesecake. "

"Sometimes artists are so set on one far out, different thing that their messages don't get across. Me and Jason [Woodberry] could have been super weird and threw a bunch of splatters on canvas that no one would have understood, but if the people don't understand what you're trying to say to them, then your art is pointless," Kiser says. "It was really important for us that even though we sugar-coated this thing with a Sci-Fi theme, that people were able to get this message."

The Sci-Fi storyline Kiser is referencing is one he and Woodberry hope to turn into a graphic novel. Its main characters are a black astronaut boy named Pluto and a toddler-like cyborg named Astro. Together, they are traveling through space — a setting that represents the idea of freedom and consciousness. It's there the two characters encounter intolerant, white supremacist like space creatures, including the intolerant rulers, Jim Crow-inspired robots.

But the message in Intergalactic Soul is a healthy one rooted around growing discussions related to black males, racism (past and present), negative stereotypes and the recent string of violence and police brutalities following and related to the shooting of Michael Brown by Officer Darren Wilson in Ferguson, Missouri, in August of 2014. 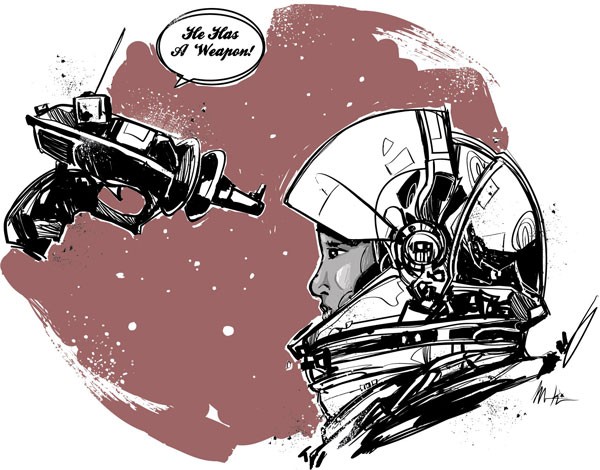 Though Kiser and Woodberry had begun work on the exhibit prior to Ferguson, the events and harsh debates erupting from web and social media platforms helped them to tighten their focus and angles for the show. One look at Kiser's "Lasers Not Losers" and you'll get the idea.

In one work, titled "Attack of the Jim Crowbots," a crowbot carries the confederate flag, another resurfaced topic of debate after Charleston shootings at Emanuel African Methodist Episcopal Church in June.

"This stuff keeps revolving and going in circles. Hopefully, one day this will just be a thing of the past," Kiser says. "I mean, here we are in 2015, and we're still having arguments about the confederate flag and what it means and police brutality. None of this stuff is new though, it's been going on for the past 100 years."

As a black male, Kiser, 37, can relate to being misunderstood and stereotyped based on the color of his skin and racial profiling. In addition to comics, Sci-Fi and an umbrella of influences like Star Wars, Star Trek, Interstellar and Pacific Rim, the duo also used music as influence for the space tale.

Music plays a huge role with some lyrics scattered across the info displays. They looked to hip-hop artists like Lupe Fiasco, Jay Z, Nas, Notorious B.I.G. and Hypnotic Brass Ensemble for insight. Of the latter, the two repetitively played the track "Black Boy" from the group's Bulletproof Brass album. Kiser's character Pluto was even inspired by the track, while Lupe Fiasco's "I'm Beamin'" is a musical muse for Kiser's piece "Lasers Not Losers."

While some of the time lyrics inspired works, other times the works themselves reminded them of particular songs, so the group incorporated lyics into the title info boxes.

For one of his works, Woodberry, 33, was heavily inspired by the cover Notorious B.I.G.'s 1994 debut album, Ready To Die. The piece, titled "Ready to Fly" resembles the album's cover. Above the image of Astro, he's placed Swahili text he hopes will push viewers to translate or perhaps even spawn an interest in African history and languages.

Another one of Woodberry's works, "Dark Matter," features a child who is blowing bubbles and nonchalantly creating the universe. For this, Woodberry looked to his past and the limitations some of his art teachers set on him. The piece, which won The Arts & Science Council's ArtPop contest and is featured on billboards around town, is about the importance of cultivating one's child-like imagination and the ability to release creativity without caring what others think. The boy in the piece was modeled after Woodberry's son.

Diverting from the digital medium that reigns supreme in the show is Kiser's "Kosmic Kulture Krunch" (Think: KKK) installation.

"That piece is one of the strongest and it's in response to the stereotypes that we're fed on a day to day basis or any negative images that we don't do research on and just assume," Kiser says. 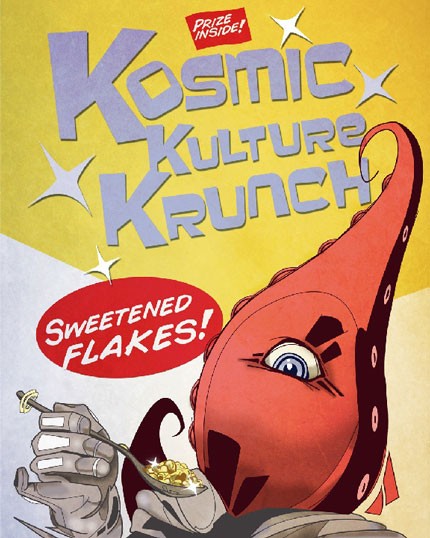 It represents the cereal the folks in space are eating and how it curbs their appetite in reference to negative black stereotypes and mishandlings by authority powers.

"I want people to understand what's going on in our society, but I don't want to be too preachy about it. A lot of people are blind to some of the things that are going on in our society. If it's not affecting them and their community, then it doesn't matter. But to me every life matters, no matter who you are or what race or shade you are."