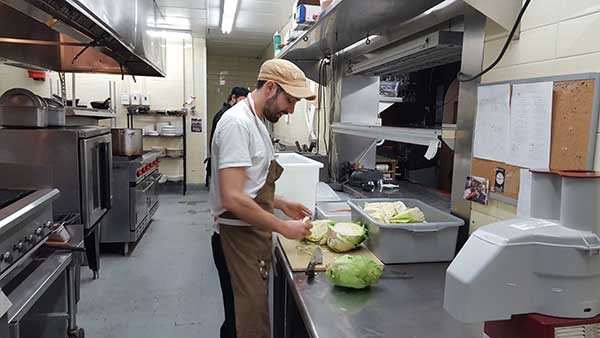 The local food movement has grown so strong in recent years that it's almost become a tagline: "Eat local," "Local farms, local food," "Know your farmer, know your food."

Here in Charlotte, multiple farmers markets have popped up all over town, from Davidson to Pineville, with customers seeking Piedmont-produced ingredients all year long. But a stroll through a wintertime market quickly shows the unspoken corollary to keeping your food local: eating seasonally. Our region is blessed with growing seasons that essentially stretch year-round. From the earliest pops of asparagus and strawberries through the squash and sweet potatoes of fall, every season offers its own changing smorgasbord. Yet, for a culture used to tomatoes in January and strawberries in September, adapting to nature's calendar involves challenges.

The first of these is knowing what grows when. For a raw beginner, the NC Department of Agriculture's website offers a handy infographic showing the availability of more than 50 crops grown across the state. But that's just for starters.

Matthew Krenz has been executive chef at the Asbury for less than a year, but he has seven years of experience sourcing locally, with stints at Passion8 and Durham's Four Square. Even so, he depends on relationships with farmers to get a clear idea of what crops will be bountiful, or when to expect the next exciting ingredient. For those of us without farmers on speed dial, he suggests building relationships. "Ask a chef, ask somebody who goes to the market regularly, even a neighbor, and ask if you can tag along."

One chef worth asking is Clark Barlowe. The Lenoir native has been sourcing strictly North Carolina ingredients since opening Heirloom three years ago, so adapting to the calendar is second nature to him. He adds chef-authored cookbooks as a resource for local-minded cooks. "Most cookbooks that I've seen recently are written seasonally," Barlowe says. Best of all are brooks from local chefs, such as Edna Lewis' Taste of Country Cooking, or Vivian Howard's Deep Run Roots.

Barlowe also points out that a discussion of seasonal eating should extend beyond produce. "Proteins are seasonal, too," he says. "Chicken has a season, spring and summer. Most of the chicken you're eating in winter is frozen." Indeed, freezing is a good solution for eating local meats year-round.

But what if your favorite source of protein is fish? You're in luck. As on land, our region boasts a long season for "crops" pulled in from the mid-Atlantic region. Chef Jim Diecchio of Rocksalt says he can source locally most of the year, with a lull from mid-January through February. "There's always stuff available, you just have to know what to use," he says.

While Diecchio may turn to Gulf Coast fisheries during his brief low season, he prefers to use less popular species such as croaker or sea bream to stay local. The key, he says, is to build a relationship with your vendor. He lauds Tim Griner, of Charlotte Fish Company, as a reliable source of information. "Not only for finding out what he's able to get, but he kind of gives you an outlook of what's coming," Diecchio says.

The midwinter low season offers the biggest challenge to eating seasonally. Though root vegetables and leafy greens are fresh and gorgeous, week after week of them can make even the most avid local-food advocate head for the glories of the nearest Harris Teeter. 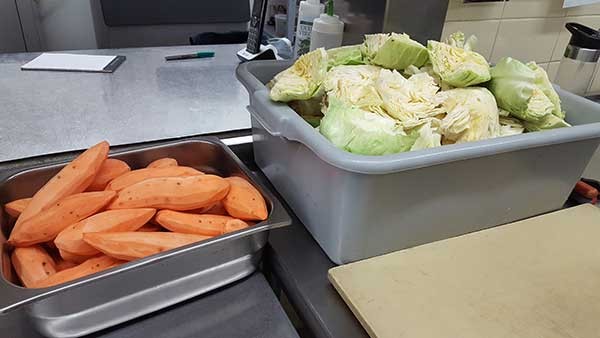 Not Barlowe. When I stop into the Heirloom kitchen in the middle of January, he's happily cutting down cabbage and peeling sweet potatoes. That's because he doesn't define seasonality by what's at the market on a given week. "It's what's in season right then, as well as what you preserve from previous seasons," he says.

Barlowe has made a name for himself as the man who finds a way to preserve just about anything. He ticks off his different methods — freezing, dehydration, pickling and salting — before remembering his newest approach, sand curing. "It's kind of a cross between salt-curing and air-curing," he explains. Both methods are slow-drying dehydration techniques traditionally used for meats and root vegetables.

With flavors saved from every season, Barlowe can perk up the cold weather mainstays he finds at the markets for month after month. "By adding something that's way out of season, like fiddlehead ferns with kale — that's what makes it interesting," Barlowe says. "And you don't need a lot."

If drying herbs or pickling okra strays outside your culinary comfort zone, Krenz points out that preserved foods are popping up at farmers markets and retailers. "Some of it has to do with the ways we're starting to see the health benefits of some of those foods," he says, "but as well, the need and growing demand for local food is causing people to preserve [it]."

Krenz cites jarred tomatoes and pickled vegetables as common options for adding warm-weather flavors to the table. "Bringing in one of those ingredients could help sell you on the rest of it."

Both Barlowe and Krenz also suggest different cooking techniques or spices to change up the flavor profiles of the same old ingredients. Krenz looks to international inspirations, like preserved lemon to spike up a dirty rice dish. Barlowe likes to play with braises, stews and soups. "The way I like to think about sweet potato soup is, what do I like in savory potato soup?" Barlowe says. So instead of the traditional pumpkin-pie spices, he swings with onion, garlic and bacon.

Regardless of their approach, Barlowe and Krenz say eating seasonally is worth the challenge. The freshness of recently harvested crops means both better flavor and more nutrition, but the effects spread beyond the plate. Barlowe cites the boost to the local economy, keeping food dollars in the community, and Krenz points to the environmental impact of eating in tune with nature.

"We forget that we can't just take from the earth," Krenz says. "At some point, we have to give back."