Lifting the curtain on the people who make farmers' markets tick 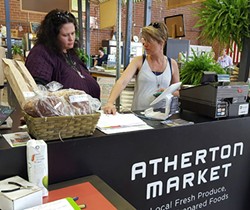 As spring looks toward summer, Saturday mornings in Charlotte find more and more residents heading to farmers' markets. From outlying suburbs to central neighborhoods, farmers and shoppers come together in all parts of the city to sell, shop and socialize. Whether under metal-girded barns, temporary tents or blazing sun, each venue presents its own picturesque version of wholesome food and happy customers.

Yet it takes more than a few tents and tables to make a farmers' market. Behind every scene of booths overflowing with peas and carrots is a market manager organizing space, coordinating events and sometimes even cleaning bathrooms.

Twenty-five years ago in Matthews, a small group of farmers began gathering on Saturday mornings, attracting a small but expanding customer base. Four years later, organizer Sammy Koenigsberg of New Town Farms recognized he needed help, and turned to then-vendor Pauline Wood. "I thought to myself, 'All this guy seems to need is somebody to do promotions and a little organization,'" Wood recalls today. "Famous last words; 21 years later, here I am!"

But "here" covers a lot of ground. So does "organization." Today Matthews counts more than 40 vendors, some of them seasonal. Markets generally have a vendor application process, ensuring that sellers fall within their guidelines, whether that be the products they sell or their proximity to the market (Matthews' only pulls in producers from within 50 miles). In most cases, a board of directors sets the rules, with the manager primarily responsible for hands-on oversight.

Beyond sheer numbers, organizers must balance the variety of vendors. At Matthews, food sellers are kept to 70 percent farmers and 30 percent bakers, with very few crafts in addition. "You want something that fits with the market, so we limit it to old-fashioned, handmade farm crafts," Wood says.

Halfway across town, the brand-new Cotswold Farmers' Market recently finished the selection process for its own slate of vendors. In the past year, manager Mike Walker has put a lot of miles on his vehicle, first visiting 20 markets across the state to learn the best practices, then inspecting each of the 20-plus producers who helped open the market on May 7th.

"We're trying to make sure every farmer and meat producer is within a 100-mile radius," says Walker. The market, a Charlotte Providence Rotary Club community project, is also focused almost totally on food, with flowers, as well as locally-made soaps being the only non-edible merchandise.

Once vendors are in place, managers continue to juggle market offerings, sometimes asking sellers to bring only part of their product line to avoid too much competition. There are also considerations about the best locations within the market, whether they be under shade or in high-traffic areas. At Atherton Market in South End, the establishment of a weekday co-op last year has resulted in a lot of shuffling, and manager Sam DeRosa knows the pains of affecting someone's business. "These people are impassioned about this place and their items," she says.

While their markets operate only on Saturdays, both Wood and Walker put in plenty of weekday hours. Wood estimates she and assistant manager Lauren Schexnider spend about 25 hours a week on their phones and computers, composing newsletters and Facebook posts, organizing events and confirming chefs and performers. From weekly cooking demonstrations to an annual baking competition and this year's 25th-anniversary fundraiser, the weekend market requires weeklong effort. Even after two decades, a myriad of details floating in the manager's mind keep her awake on most Friday nights.

For both Wood and Walker, volunteer power features prominently in making their markets tick. About 20 regular volunteers support the effort at Matthews, with about a dozen pitching in each Saturday. They are everywhere, setting up and helping vendors unload, answering customer questions and assisting chefs in the demonstration tent. Walker is drawing some manpower from his and other Rotary clubs, but has had plenty of interest from other folks eager to lend a hand with setup, traffic control and breakdown.

Through it all, each manager seeks to create a unique atmosphere for his or her market. Atherton's indoor space is open six days a week, offering coffee and prepared foods. "We are more of a community hangout," DeRosa says. "We want to give people a reason to sit here and stay."

While Wood's Saturday mornings can be hectic, she says her favorite part of the job is seeing the human interaction among customers, farmers and volunteers. "It's the community, coming together over nutritious food," she says.

More than that, both she and Walker talk about an educational drive behind their markets. Much of the programming at Cotswold will be directed toward children and helping to teach them about healthy eating. And in Matthews, Wood focuses on developing relationships between sellers and buyers. "We hope that by people getting to know the folks that produce their food, they look at their plate differently."