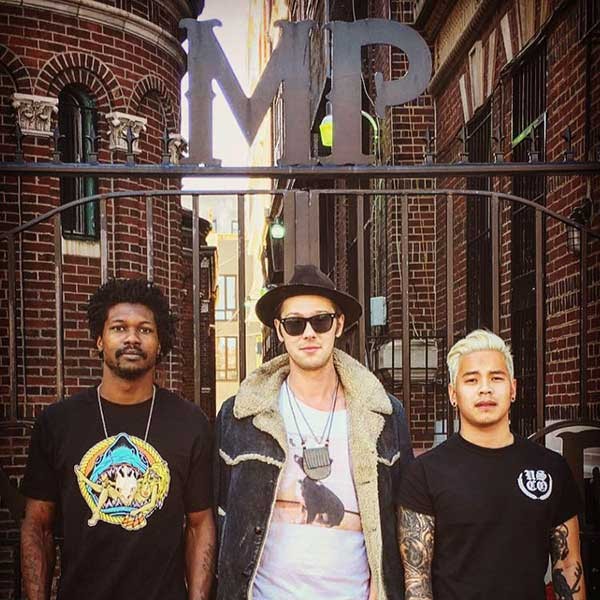 "People been fed so much bullshit for so fuckin' long that when they get some real shit, it hits 'em like a goddamn shot of dope."

That's what Gastonia-born Travis Phillips said in 2012 about the rock 'n' roll that Charlotte's best-kept secret, Modern Primitives, cranks out like raw meat from a grinder. Five years later, that hasn't changed. What's changed is the band's lineup, and along with it, a beefed-up sound courtesy of new bassist Tim Nhu, who came from the metal world.

Don't let the "M" word mislead you, though: Modern Primitives haven't transformed into Gojira or Sumac. The songs still center on Phillips' threatening twang and searing guitar squall over Phil Gripper's pounding drums. Nhu just brings a thicker, more melodic bass underpinning to the table, allowing Phillips to explore more on his guitar — to go off on extended excursions into realms he's described as "Sun Ra on outer-space amphetamines."

When Creative Loafing published a cover story on Modern Primitives in 2011, the band — Phillips, Gripper, and then-bassist Darien Steege — was steeped in scuzzy southern garage rock reminiscent of '80s garage-revival groups like the Fuzztones filtered through the zaniness of '60s experimental folk-rockers the Holy Modal Rounders.

The band still draws from those and other sources, but the trio dives deeper into the rock-and-blues sludge on its new eight-song EP Hot Water Woman. We sat down last week with Phillips, Gripper, and Nhu on the back patio at Common Market, where they sucked down tall PBRs, talked about their new LP and expanded sound.

Creative Loafing: For those who haven't read the earlier CL story, Phil, could you tell us how you and Travis got together?

Gripper: We met in 2008 at a friend's going-away skate party in Columbia, South Carolina, and wound up figuring out that we both lived near each other in Charlotte. At one point, Travis picked up an acoustic guitar and we started jamming on Violent Femmes songs on the porch and said, "We should get together some time." But three years went by before we ever actually started Modern Primitives.

Are you from Charlotte originally?

Gripper: Nah, man, I'm a military brat. I was born in Austin, Texas. But my family ended up in Florence, South Carolina, and I'd come up to Charlotte to skate. I ended up moving here in 2005 and hanging out in Plaza Midwood in 2006.

Did you play music at that time?

Gripper: I'd been playing drums since I was 15. My first band was a hardcore band called Minority, but I was the only black person in the band. [laughs] I was the only real minority.

So Travis — you, Phil and Darien were the original Modern Primitives lineup and played together for about three years. What happened to Darien?

Phillips: He climbs cell phone towers now. Being bass player in Modern Primitives doesn't afford you a whole lot of money. [laughs] But seriously, he makes a shit-ton of money doing that now and he needed it, because he was going through some real-life type of shit. His mom lost her house, so he had to set her up with a trailer, and he just didn't have time to be playing in a band.

Do you stay in touch with him?

Phillips: Yeah, it was no weird falling out or anything. We're still friends and I see him all the time. That said, I'm really happy to have Tim playing with us now. He's brought new blood to the band.

Nhu: I played in a band around Charlotte called Black Pope — very different genre of music. It was metal. Travis and I had known each other for a long time, more as acquaintances than friends at that point. One night we were at Snug Harbor together and tossed around the idea of him and me getting together and playing some songs.

Phillips: That was when me and Phil were just doing this as a duo. We did a residency at Snug Harbor as a two-piece where we'd do something different every week. One week we'd do a Randy Newman tribute and the next would be all rap. It was cool.

There's a a classic MC5 song, "Ramblin' Rose," on your Bandcamp site right now that I think is the best cover of that song I've ever heard.

Phillips: Oh, yeah, yeah, yeah — I think that was another one we did. And the Howlin' Wolf thing — that's on Bandcamp, too. We recorded both of those songs at Phil's house. We did all of that in a day with a broken guitar with like four strings on it, and one of those little kid megaphones that make cop siren sounds.

What has Tim brought to the band that you didn't have before?

Gripper: He just brings a whole new level of musicianship. It's really been refreshing to have someone come into the band who understands the business. A lot of times I've felt like the dad of the band, and I don't have [to bear] that responsibility so much now.

Phillips: It's a big difference. Before, it was pretty much me playing both guitar and bass. I taught Darien how to play and I would write all the bass parts. I was hyper-focused on that and didn't have as much time to experiment on guitar. So we were basically just doing sped-up blues. When Tim started playing, it freed me up to focus on doing static stuff on my guitar, because Tim's such a fluid bass player. He just has such a different ear for music, and you can hear it in our new stuff. It's just a lot thicker and meatier, and I get to do more improvising.

Tell me about the new EP and new videos you've released — one really violent one that got a lot of attention. Are they indicative of the current band's vibe?

Will you be doing mostly new material at the Visulite show this week?

Gripper: That's the only song that we showed Tim how to play and it's not even our own song. He's actually written two songs.

So, Tim, what's it like coming from metal into this avant-garage-rock weirdness? Did you ever listen to anything like this?

Nhu: Not particularly, no. I've learned a lot since joining the band. I've primarily played heavy music. When I joined this band, everything was new and it was such a different dynamic. These two make me think outside the box. Instead of doing a simple pattern, I always wind up doing much more, because they always inspire me to want to do new things.

Now you have to think "Sun Ra on outer-space amphetamines."

Phillips: [animated] Yes, yes, yes! But actually, I always just thought of us as R&B — with some noisy guitar stuff over the top.