The Wormholes are on a mission, and it's not just to make majestic, electronics-infused rock. They also have a message they'd like to get out to the world.

"The message is very important to us," guitarist and singer Ben Verner says. He's sitting at Trade and Lore in NoDa, in a NASA T-shirt emblazoned with a spaceman illustrated like Leonardo da Vinci's Vitruvian Man. Next to him is Wormholes' drummer and singer Chris Walters. They're sipping coffee and talking about the group's latest album, Cosmic Propaganda, and the Wormholes' May residency at Snug Harbor, which begins the 2nd and continues each Wednesday through the 30th

"We try to convey our message in more than just the music or the lyrics," Verner continues. "It's in the overall presentation."

The Wormholes' presentation involves graphic art, backdrops, lighting and mood-setting for the live presentation of their new album, which is a big leap forward from their 2016 set What Do You Know? That was a much more conventional set of atmospheric indie rock, with vocals mixed way up on tracks like "Future Becomes Past," and most of the songs built around the standard guitar-bass-drums configuration.

"What Do You Know? was recorded right when the change in our sound really started," Verner says. "Chris was still kind of new to the band, and we were in a weird place where we didn't want to play the old stuff; we wanted to write new stuff, but there were still a couple of songs that were transitional."

On Cosmic Propaganda, due out May 16, the Wormholes have jumped whole-hog into space music, with swells of keyboards and twinkling electronics giving tracks like "Whistleblower," the spooky "Cold Fish" and the spare first single, "The Antidote," a wide-open feel. In the latter song Verner sings, "This world can fake you into believing that what you're perceiving proves a point. / This world can break you down by deceiving you, always thieving you of love."

Love is an important part of the band's message, Walters says.

"The name Cosmic Propaganda is more than just the album title," he explains. "It's kind of a mantra. We've self-proclaimed ourselves ambassadors of cosmic propaganda."

What that means, he says, is that the band wants to upend the whole idea of what propaganda is. "Especially in the context of where we are today in modern politics and media — everybody seems to have an agenda to push, people construct narratives, and propaganda is used everywhere. But it's perceived as this negative thing. So we just kind of turn it on its head to where we're aware of all of that, we're aware that everyone wants to sell you an idea, and we want to sell you an idea, too. But the beauty of it is that the idea we want to sell you is a message of love and kindness. Our consciousness is bigger than we are; it's bigger than our egos."

The centerpiece of Cosmic Propaganda, both musically and message-wise, is the song "Propaganda," in which a soulless narrator similar to the computerized voice in Radiohead's "Fitter, Happier," recites lines from Aldous Huxley's Brave New World:

"The principles underlying propaganda are extremely simple," the pitch-shifted voice intones over sounds reminiscent of composer György Ligeti's hazy "Lux Aeterna," the music played in 2001: A Space Odyssey as Dr. Heywood Floyd shuttles across the moon to examine a strange monolith. "Find some common desire, some widespread unconscious fear or anxiety," the voice continues. "Think out some way to relate this wish or fear to the product you have to sell; then build a bridge of verbal or pictorial symbols over which your customer can pass from fact to compensatory dream, and from the dream to the illusion that your product, when purchased, will make the dream come true."

The product the Wormholes are selling was conceived back when Verner and bassist Chris Dameron started jamming together as students at Western Carolina University in the mountain town of Cullowhee. The two eventually transferred to UNC-Charlotte and officially formed the Wormholes along with drummer Andy Allen in 2011. Fellow WCU student Walters arrived later, and began videotaping some of the band's shows as it morphed from a conventional pop-rock sound into something more sprawling.

"A couple of years into it, we added synthesizer to the music," Verner says, "and that's when Chris joined and we started integrating electronic drums."

After Walters replaced Allen, the band began writing songs with more of an electronic feel, but there was a period of transition when the guitar still ruled the sound. That's what you hear on What Do You Know?, a good but uneven set of music. The songs on Cosmic Propaganda, by contrast, all hold together, forming a singular, cohesive vision.

"The stuff we do with guitar and the stuff we do with synthesizers has kind of become this amoeba, as opposed to what you heard on that first album," Walters says. "On that album, we have songs that were more electronic along with songs that were more guitar-driven, and the disparity is very clear. That's all meshing together on the new album; we're integrating those sounds a lot more now."

In addition to Walters' use of electronic drums, bassist Dameron has begun to play his bass lines on a Moog synthesizer. "He no longer plays bass on an actual bass guitar, because we wanted that heavier texture that we couldn't really achieve on a bass guitar."

The first glimpse the Wormholes offered of this new configuration was in a pair of songs, "Stardust" and "Mindship," which they released last year. The band released a stripped-down version of "Stardust" as a video, setting up amid a barren landscape of rocks and stumps atop Crowders Mountain, with a battery-powered guitar, MicroKorg synthesizer, a Korg Volca Beats rhythm machine and tiny amplification devices. The sound — spare, stark and beautiful against a faded blue sky — portended the overall vibe of what would come on Cosmic Propaganda.

During the Month of May, the band will be performing material "the new way" at their Snug Harbor residency, bringing along fellow acts each week that complement the Wormholes' eclectic tastes. On Wednesday, May 2, the band will focus on its harder-edged material — like the instrumental "Devil Music," the one solidly guitar-driven song on Cosmic Propaganga -- on a bill with local rockers Modern Primitives and the Business People.

A week later, on May 9, the vibe will be more chill when the Wormholes' guests include the reggae band Lovely Budz, as well as Swim In the Wild. On May 16, the Wormholes will officially release Cosmic Propaganda and bring along a pair of out-of-town acts, Indighost and Rare Creatures, as well as the Charlotte duo The Lady Comes First. On May 23, the trio will go all-out electronic on a bill with the terrific local ambient-dance duo Astrea Corp., and on May 30, the Wormholes will perform an all-covers set ranging from songs by Radiohead and Tame Impala to the Red Hot Chili Peppers — done from their own singular musical perspective.

"It was really important to us to tastefully curate each night individually, because just being an audience member, I don't want to go see the same thing every night," Walters says. "The other important thing is that we all have pretty varied tastes and we wanted each night of the residency to reflect that. We play with a lot of different kinds of bands and we enjoy a lot of different types of music, so we thought this residency would be a cool way to kind of make each night individual for us and for the people who come out to the shows." 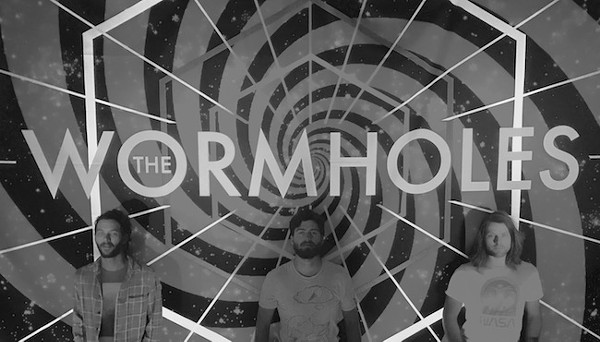 It's all in keeping with the Wormholes' ideas about propaganda.

"This is not a political idea," he adds. "It's an existential idea. Our lives depend on it."