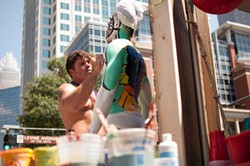 David Hains kept his answers short in our first interview for this story. According to the spokesman for the Catholic Diocese of Charlotte, the church's position on gay marriage was set in stone -- it would never acknowledge a union between two men or two women. Conversation over. End of discussion.

But soon after we spoke, Pope Francis opened up to reporters in an interview that shocked the world.

"If someone is gay and he searches for the Lord and has good will, who am I to judge?" the leader of more than 1 billion Catholics asked. "We shouldn't marginalize people for this. They must be integrated into society."

After Francis' comments, Hains and I meet again. This time, he isn't as guarded.

"He didn't deviate from church teaching," Hains says of Francis. "He opened the door for more meaningful dialogue."

After voting against Amendment One last year, it is with a more welcoming spirit, too, that Charlotte ushers in the 13th Pride festival, held Aug. 23 and 24 in Uptown.

The largest LGBT event between Washington, D.C., and Atlanta will feature a festival on Saturday and, for the first time in years, a parade, on Sunday. (The Catholic Church is at the heart of the celebration, if only physically: St. Peter's, Charlotte's oldest Catholic church, is smack dab in the center of the Uptown festivities. In 2011, Pride changed its schedule to accommodate a funeral at St. Peters.)

In 2012, a week before the Democratic National Convention, Pride attracted more than 45,000 people to Uptown, co-director Richard Grimstad wrote in an email. The festival's attendance has grown nearly five-fold since 2010, and organizers expect this year's to be the largest yet.

It has grown in a city known for its churches, liberal and conservative. Many are or have become more accepting of the LGBT community, but many are still at odds with themselves about whether to fully embrace homosexuality — from acknowledging openly gay parishioners (Catholics) to allowing gay ministers (Presbyterians).

While Francis' comments are seemingly friendly toward gay people, Hains says the Catholic church is nowhere near changing its views on homosexuality — or even acknowledging something as harmless as a Pride festival.

Not for moral reasons — the Catholic Church doesn't consider Pride parades a sin, Hains says, adding that a gay person "should live a life of peace and dignity." But, churches must still be "faithful to the teaching of the Catholic Church." Basically, homosexuals are acceptable — so long as they don't "act out" their homosexuality, physically or spiritually, such as in marriage.

Hains says the Catholic position on marriage is rooted in nature. (Theirs, of course, is not unlike other churches' positions.) Men and women were made differently for a reason, compatible and able to "naturally reproduce," he says. That may seem anti-gay to some, but Hains says the Church applies its rules fairly, to everyone.

Acting out homosexuality is "a sin, on par with lying, cheating, stealing and having sexual relationships outside of marriage," says Hains. "I don't get righteously indignant about others' sins. I don't care about other people's sex lives."

What has changed, thanks to the pope, is the church's willingness to converse about issues of sexuality and sin.

"When someone feels marginalized, that dialogue should be going on," Hains says.

Charlotte Pride has initiated conversations about faith and sexuality for years. The group hosts an annual interfaith worship service, and this year, the leadership has met weekly at a local church. Grimstad, the Pride co-director, says several churches are participating in this year's Pride, including Myers Park Baptist Church, Temple Beth El and Metropolitan Community Church of Charlotte. Catherine Houchins is Metropolitan's pastor.

Metropolitan, a 125-member church on Eastway Drive, has been in Charlotte since 1980. It was founded by a gay man who had been evicted from his local church, Houchins says. She has been involved with it for 32 years.

She laughs at the pope's olive branch ("More like an olive twig"). For as long as it has existed, Metropolitan has participated in Pride. This year, Houchins says, her congregation is mostly excited for the parade.

"It's a way of getting the name and presence of our church out," she says, and the advertising isn't in vain. "There are churches open to everyone — particularly to the LGBT [community] — where people can see that they are accepted, not condemned."