Back to square one

There was a time when December was a slow news month locally. But as with many precedents and preconceived notions, that idea has been put to rest in North Carolina in 2016.

On the morning of Dec. 19, following a week in which the North Carolina General Assembly stripped the incoming governor of much of his power during last-minute special sessions using secretive legislative loopholes just because he's not on their team, the Charlotte City Council showed it can be full of surprises, too.

During an unannounced move in a meeting that morning, the council voted unanimously (10-0 with District 1 representative Patsy Kinsey not present) to rescind the city's non-discrimination ordinance, which in February added gender identity and sexual orientation to a list of traits protected from discrimination in restaurants, taxis and public restrooms.

The original passing of the ordinance led to a special session in the state legislature, during which lawmakers passed the now-infamous House Bill 2. HB2 has since cost the state millions of dollars in boycotts and lost opportunities for economic growth.

While a majority of the council has remained steadfast in their refusal to rescind the original non-discrimination ordinance, the surprise vote on Monday was done with the understanding that the state legislature would call yet another special session to repeal HB2 in full. In fact, a provision to Monday's ordinance stated that if HB2 is not repealed by Dec. 31, the non-discrimination ordinance will go back into effect.

The agreement looks to have been brokered by Governor-elect Roy Cooper, who released a statement shortly after the city council vote stating that he had been in discussions with Senate Leader Phil Berger and House Speaker Tim Moore, who assured him that a special session would be called for the next day. It was eventually called for Wednesday, Dec. 21.

After the council vote, Governor Pat McCrory's office quickly responded with a statement pointing out that McCrory and other lawmakers had offered the same deal in previous months, only to be shot down by city leaders.

"This sudden reversal with little notice after the gubernatorial election sadly proves the entire issue originated by the political left was all about politics and winning the governor's race at the expense of Charlotte and our entire state," Graham Wilson, McCrory's press secretary, said in a statement.

The claims that Charlotte City Council had once rejected an identical offer just months earlier — claims also made by Berger and Moore following the council's vote on Monday — were not true.

In an episode of "Capital Tonight" that aired in the Triangle area and was posted online on September 28, Moore admitted that in the most recent offer to repeal HB2, lawmakers would "make sure we kept in the bathroom piece," meaning the provision in HB2 banning transgender people from using public restrooms that coincided with their gender identity would remain law.

Nevertheless, many in Charlotte's transgender community — which spent more than two years fighting for the city to approve a non-discrimination ordinance that protected them — felt betrayed by the council's surprise vote on Monday.

In an odd twist of political parallel, some who spoke with Creative Loafing agreed with McCrory's implications that the city's fight for transgender protections was a political ploy to help Cooper win the governorship.

Paige Dula, founder of transgender support group Genderlines, said she was dumbfounded at the news of Monday's surprise vote.

"I feel like we were just used as a good political talking point," she said. "HB2 gave something good for Roy Cooper to bust McCrory's chops with. We outlived our usefulness in that respect."

Ashley Williams, an organizer with the Trans and Queer People of Color Collective in Charlotte, said the act did not surprise them, but affirms their suspicions that protecting the transgender community was never a true priority.

"When I think about all the work that we've been doing this whole year and before this year, I'm really worried that trans people of color are going to continue to be the losers, if you will, in this deal — and I'm using this language like 'deal' to represent how this is all a game and it's been a game," Williams said. "It's clear that that's what it is, strategically. I think it's really fucked up that they're making deals about trans people's lives without really considering what things mean for them."

Erica Starling, a transgender woman in Charlotte who publicly addressed city council on numerous occasions while advocating for a non-discrimination ordinance during an unsuccessful attempt in 2015 and leading up to its passage in 2016, was angered when she heard the news.

"It is hugely depressing. The initial reaction is that we've done this twice already, and now we are beginning to cave to an illegitimate GOP general assembly," Starling said. "I'm pissed. Because I think that there is no price on equality for people like myself who are transgender."

Despite Starling's initial dismay at news of the council's vote, she — more than others whom CL spoke with — remains optimistic that the deal was made with an eye on building support for statewide LGBT protections under Cooper's administration.

Starling sees this as the first step in yet another fight for a final non-discrimination ordinance in Charlotte, this time under a Cooper administration she says won't trudge on city's individual rights the way McCrory did.

"I think it's more of a political move for something better going forward," Starling said. "So are we pissed? Yeah, we're pissed. But do we have much control with the way the general assembly has been? In my opinion, if we don't take HB2 away then the city council will never have an opportunity to pass [a non-discrimination ordinance] again."

Matt Hirschy, director of advancement at Equality NC, has a similar feeling of cautious optimism, although he won't be as specific with what he thinks will come of the situation when — or if — HB2 is repealed in the coming special session.

Hirschy said that, although Equality NC executive director Chris Sgro released a statement endorsing the council's decision, he could not support nor endorse the council's surprise vote. He added, however, that it's too early to tell under what intentions the vote was carried out.

"The vote was unanimous, and so that leads me to think that they did so knowing that there is a path ahead somehow, that's what I'm thinking," Hirschy said on Monday afternoon. "This was never about Charlotte. Charlotte never did the wrong thing. Charlotte never passed anything that was crazy. This was only about the general assembly doing really bad things all the time."

Hirschy emphasized that, assuming the legislature does the right thing on Wednesday and repeals HB2, the focus will shift to re-implementing protections for LGBT residents statewide.

"Repealing HB2 is great; it's the most anti-LGBT law in the country," he said. "We know that we've got to work really hard, because that's not good enough if that only puts us back to a place where people are vulnerable to suffer more discrimination. This is a start to what will be even more work for all of us." 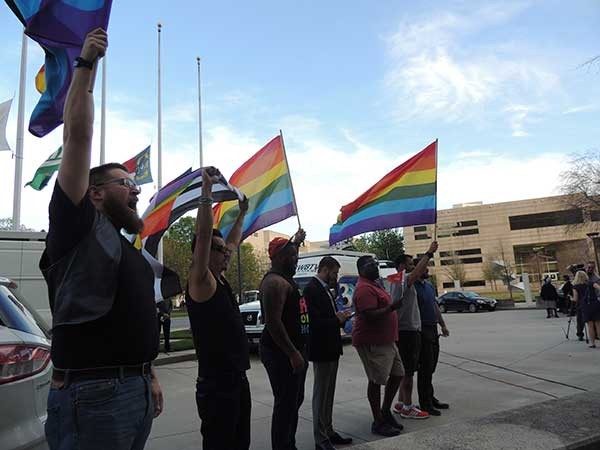 District 5 represenative John Autry is known as one of the more LGBT-friendly city council members. Some members of the LGBT community have expressed surprise that he voted for rescinding the ordinance on Monday.

Speaking on Tuesday morning, Autry said that it was a decision he originally opposed, but was convinced of through discussions that went late into Sunday night, including with his openly lesbian daughter.

He said he's confident in Cooper's leadership and believes he will be a champion for the LGBT community.

"I understand the frustration and distrust — the appearances that our actions led to — but without the full repeal of HB2, and without Governer-elect Cooper as the Governor come Jan. 1, there is no path forward for LGBT protections anywhere in North Carolina," Autry said. "That's what I'm focused on, that's my goal for this state: to have full LGBT protections, to have assurances for all of our citizens."

For some, however, regardless of what Monday's decision leads to, the way in which the city council carried out the vote without informing anyone beforehand made for a bad decision no matter the outcome.

Jay Leach, senior minister at the Unitarian Universalist Church of Charlotte, advocated tirelessly for the passage of a non-discrimination ordinance. To him, regardless of any broader goal in mind in the council's vote on Monday, the secretive nature of the vote is what's most indicative of a disconnect between local government and its constituents.

Dula agrees, and says she's "not optimistic at all" that the vote will end up being the right decision for Charlotte.

"If there was something in the works, why would they have not talked to some of the other LGBT leaders to say, 'Here's what's coming down,' so we wouldn't be blindsided and we could get behind them?" Dula said. "As it stands, they've got a long way to go to lead us to believe that this is going to be a positive thing in the long run."

In 2015, Mayor Jennifer Roberts ran on a platform that included passage of the non-discrimination ordinance as one of her priorities if voted into office. It's too early to see how Monday's vote will affect her chances at re-election, as 2017 is an election year.

Lara Americo, a transgender woman and CL contributor, said that, although Roberts enjoys overwhelming support in the LGBT community, she should have reached out to the transgender community before making a decision that so directly affects them.

"I do feel like Jennifer Roberts supports the LGBT community, but in some ways I think she's out of touch with that community, especially the transgender community," Americo said. "If she was more connected with our community, I don't think she would have supported rescinding the ordinance."

"We need someone in charge like Jennifer, she is freaking firm when it comes to things. She doesn't waver, she doesn't bend and I love her for that," she said.

Williams disagrees, and believes Monday's vote only justifies what TQPOCC has been saying all year.

"Black people, we knew that Jennifer Roberts was out of touch, and now I wonder if other LGBT folks, if the white gay establishment will wake up and understand that she's letting us down again and they should have believed black folks when they said that in the beginning."

Despite differences in opinion on leadership and other issues, everyone in the trans community and in LGBT leadership roles agreed on Monday that, regardless of what happens during the legislature's special session on Wednesday, the focus should remain on protections for LGBT people, especially transgender people, who are most impacted by anti-LGBT violence.

"When I look at the news today and I read the different perspectives, I'm like, 'How did we get so far away from what I thought we intended to do, which is to protect trans folks?'" Williams said. "I'm confused. When I think about the NCAA and capitalism and the way in which money influenced a lot of these decisions around what was going to happen with HB2 and the ordinance, I think of how we got really far away from what we intended to do: to protect trans folks."

While the optimism level is skewed among those most affected, perhaps Wednesday's promised repeal will allow folks to focus together on getting back to that goal.