The Sandlot, The Twilight People, Women in Love among new home entertainment titles | View from the Couch | Creative Loafing Charlotte
Switch to the mobile version of this page.

The Sandlot, The Twilight People, Women in Love among new home entertainment titles

THE CITY OF THE DEAD (1960). While the title hints at a zombie flick (more so since there is an Italian zombie film with a similar moniker, City of the Living Dead), this British effort actually centers on witchcraft. It's a buried gem in that subgenre: Better known by its American name (Horror Hotel, which I guess sounds like a zombie flick starring Elvis), it’s a movie ripe for discovery. Christopher Lee kicks off the proceedings as a college professor who suggests to his student Nan (Venetia Stevenson) that if she's really interested in continuing her study of witchcraft, she should journey to the small Massachusetts town of Whitewood, where a witch had been burned at the stake centuries earlier. Nan soon arrives in the fog-shrouded village, whereupon the locals eye her suspiciously, the priest (Norman Macowan) insists she leave immediately, and the innkeeper (Patricia Jessel) evades all her questions. Astute viewers will catch that a narrative bait and switch mirrors one from Hitchcock's Psycho (released around the same time) — it's just one of the startling developments in a film full of fine characterizations, intelligent dialogue, and a pervasive atmosphere of dread. The movie marked the big-screen debut of director John Moxey; he would helm only a half-dozen more films before spending the next quarter-century exclusively in television, directing the pilot episode of Charlie’s Angels and working on such hit series as Mission: Impossible, Kung Fu and Murder, She Wrote.

Blu-ray extras consist of audio commentary by Lee; an interview with Lee; and the theatrical trailer. 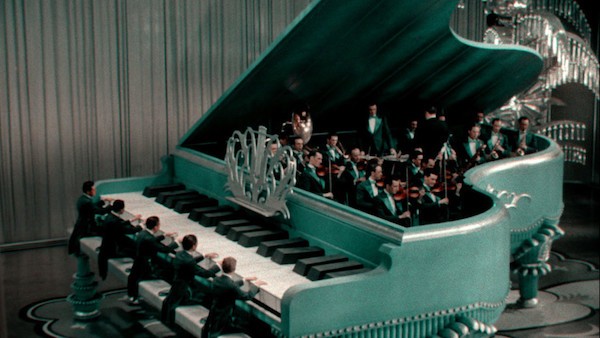 KING OF JAZZ (1930). Movie musicals were big business during the early years of the talking picture, led by such smashes as 1927’s The Jazz Singer (the first talkie) and 1929’s The Broadway Melody (an Academy Award winner for Best Picture). Conversely, King of Jazz was a sizable flop upon its initial release, but Criterion’s new Blu-ray edition should prove to be a hit with film fans looking for something different. Bandleader Paul Whiteman (the titular King of Jazz) is the ostensible lead in what’s actually a musical revue shot in early Technicolor and filled with eye-popping numbers, brief comedy sketches, and even a cartoon. Among the bits: an elaborate production set to George Gershwin’s “Rhapsody in Blue”; the delirious musical number “Happy Feet”; a show-stopping turn by Al “Rubber Legs” Norman, perhaps the most elastic performer until David Byrne came along (see the “From Screen to Stream” pick below); songs performed by The Rhythm Boys, with the chief crooner no less than Bing Crosby before he emerged a superstar; an animated segment co-created by Walter Lantz (later of Woody Woodpecker fame); and, of course, various bits featuring the affable Whiteman. Herman Rosse designed both the costumes and the sets for the film, winning the Best Art Direction Oscar for the latter achievement.

Blu-ray extras include audio commentary by jazz and film critic Gary Giddins, music and cultural critic Gene Seymour, and musician and band leader Vince Giordano; video essays of the making of the movie; deleted scenes; an alternate opening title sequence; and the 1933 short film I Know Everybody and Everybody’s Racket, featuring Paul Whiteman and His Orchestra.

THE SANDLOT (1993). Like Hook, here’s another '90s movie that was beloved by boys who were around the same age as its youthful protagonists and who have held onto those warm and fuzzy feelings deep into adulthood. Yet while The Sandlot is certainly more appealing and entertaining than the Spielberg dud, it probably won’t hold the same charge for viewers not privy to that nostalgic vibe. With writer-director David Mickey Evans providing unnecessary narration meant to stir memories of Jean Shepherd’s delightful voice-over musings in A Christmas Story, this ‘60s-set yarn centers on Scotty Smalls (Tom Guiry), the new kid in town and a hopeless case when it comes to baseball. But Benny Rodriguez (Mike Vitar), the best young player in the area, urges the other members of his ragtag sandlot team to accept Scotty into their ranks, an act of grace that allows the awkward newcomer to blossom as a person and a player. The episodic first hour, which focuses more on the personalities of the individual boys, is superior to the second half, which gets bogged down in a sustained vignette involving the kids’ grudge match against a large dog they nickname “The Beast.” James Earl Jones appears late in the game as a blind man with an interesting history – he and Evans would be the only ones returning for the belated straight-to-video sequel, 2005’s The Sandlot 2, and neither would answer the call for the third entry, 2007’s The Sandlot: Heading Home.

The Sandlot has been reissued on Blu-ray in a 25th Anniversary Collector’s Edition that contains a booklet, a poster, and 10 Topps baseball cards featuring the film’s primary characters. Extras consist of a making-of featurette; the theatrical trailer; and TV spots. 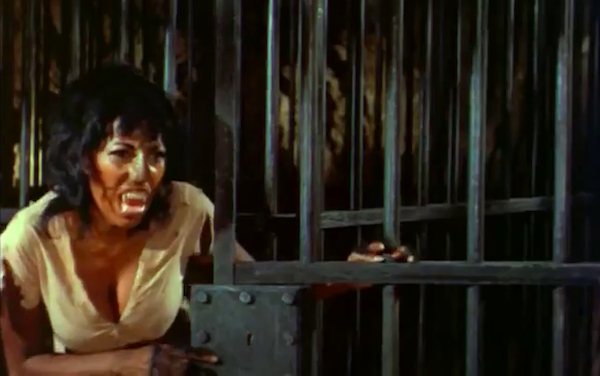 THE TWILIGHT PEOPLE (1972). The name of H.G. Wells appears nowhere in the credits, but it’s painfully obvious that The Twilight People is an unofficial adaptation of his classic novel The Island of Dr. Moreau. The name of Roger Corman also won’t be found anywhere on screen, but the picture was originally conceived for his New World Pictures before it ended up at the fledgling outfit Dimension Pictures. One familiar name that does appear is that of Pam Grier, who was already becoming known thanks to such exploitation faves as The Big Doll House and The Big Bird Cage. The Twilight People (known alternately as Beasts and Island of the Twilight People) finds her cast as the panther woman Ayesa, one of the “humanimals” created by Dr. Gordon (Charles Macauley) at his island lair. The mad doctor believes that the human race can somehow be saved by merging people with animals, and he’s assisted in his efforts by his daughter Neva (Pat Woodell, the original Bobbie Joe on TV’s Petticoat Junction) and his right-hand psychopath Steinman (Jan Merlin). The kidnapped Matt Farrell (John Ashley) is set to become Gordon’s next experiment, but with the help of the smitten Neva, he instead leads the humanimals in a great escape. This low-budget effort maintains minimal interest as long as it remains at the doctor’s estate, but the second half turns into a dreary chase flick through the jungles, with the focus on flight rather than fantasy. That bat-man is pretty cool, though. 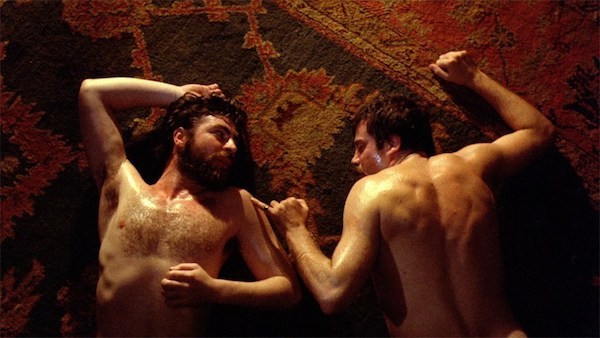 WOMEN IN LOVE (1970). This adaptation of D.H. Lawrence’s 1920 novel is arguably one of iconoclastic director Ken Russell’s most mainstream offerings – even if it does include a nude wrestling match between two men that earned the picture a fair amount of notoriety. Working from a script by Larry Kramer, Russell charts the love affairs that transpire between two sisters and two best friends. Free-spirited artist Gudrun Brangwen (Glenda Jackson) becomes involves with gruff mining heir Gerald Crich (Oliver Reed) while cautious teacher Ursula Brangwen (Jennie Linden) falls for Rupert Birkin (Alan Bates), a philosophical school inspector who believes that it’s possible for a man to love both a man and a woman in equal albeit different ways. The story occasionally grows choppy and diffuse, yet the visual splendors never fail to take command. Jackson earned the Best Actress Academy Award for her performance, but the other three principals are no less impressive. In addition to Jackson’s victory, Women in Love also nabbed nominations for Best Director, Best Adapted Screenplay, and Best Cinematography (Billy Williams).

Blu-ray extras include audio commentary (from 2003) by Russell; separate audio commentary (also from 2003) by Kramer; a 2007 interview with Russell; a 1976 interview with Jackson; 1989’s A British Picture: Portrait of an Enfant Terrible, a short film in which Russell examines his own life and career; the 1972 short film Second Best, with Bates producing and starring in an adaptation of a D.H. Lawrence story; and the theatrical trailer. 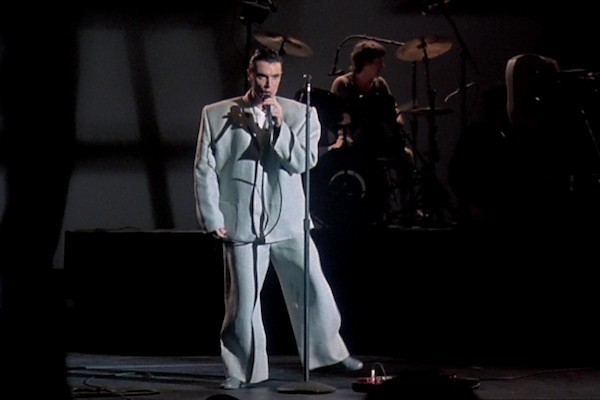 STOP MAKING SENSE (1984). One of the best movies from a stellar year for cinema and arguably the greatest concert film ever made (though The Last Waltz provides it with tough competition), Stop Making Sense finds the critical darlings Talking Heads jamming their way through a 16-song set that includes "Psycho Killer," "Burnin' Down the House" and "Once in a Lifetime." A rock orgy of volcanic power, this basically changed our perception of what we could reasonably expect from a concert movie, as director Jonathan Demme (The Silence of the Lambs) and cinematographer Jordan Cronenweth (Blade Runner) shoot in an inventive style that goes far beyond front-row-center. And at the nucleus is head Headsman David Byrne, a human dynamo who meshes the inexhaustible performing stamina of Bruce Springsteen with the rubber-limbed capabilities of a Warner Bros. cartoon character. (Vudu)

Tags: View from the Couch, film, review, View From The Couch, Blu-ray, DVD, Matt Brunson, The City of the Dead, King of Jazz, The Sandlot, The Twilight People, Women in Love, Stop Making Sense