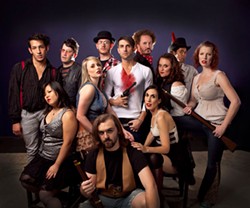 Looking for a serious theater piece that dramatically explores the life of our seventh president and conscientiously appraises his triumphs and his failings? Tough titties! Sober reflection and nuanced characterization are not in the arsenal of Bloody Bloody Andrew Jackson, the rockin', raucous, profane and incendiary musical now in its regional premiere at Actor's Theatre of Charlotte.

Historical accuracy is tossed out the window as soon as we hear that Old Hickory was born in Tennessee rather than here in the Carolinas. What 2011 Tony Award-winning book writer Alex Timbers wants to tell us — and what director Chip Decker devilishly delights in showing is — was crystallized for me in two iconic scenes. In the first, Jax stands front and center of a dance tableau, finger-snapping and performing moves clearly intended to evoke the classic Thriller video of his namesake, Michael Jackson. Later, after he's elected to the White House on his second try, he's surrounded by slutty hangers-on whom he considers the voice of the people in helping him to decide on the vexing Indian question of the day, namely how to get rid of them.

The arrogance and decadence definitely smack of Elvis — and multitudes of his rock-star descendants. That's the central concept. Whatever the 19th century equivalent was for the realm of pop or rock, AJ was the king of it in his era.

Dealing with a man who played fast and loose with the finer shadings of democracy, expanding the spoils system of political appointments while abolishing the National Bank, and who owned upwards of 300 slaves, slaughtered hundreds of Native Americans and displaced thousands more, Timbers feels no obligation to uphold the politically correct values of fairness, balance or verisimilitude. Neither Elvis nor MJ lived to the age Old Hickory was on his first presidential inauguration, yet Timbers never shows him reaching middle age, and the songs written by Michael Friedman are more simplistic, boorish and chaotic than either of the latter-day kings ever sang, shamelessly reeking with the angst of our own punk-vanquished New Millennium.

"Populism, Yea, Yea!" sets the tone immediately, rooting Andrew's political antagonism toward the elites in a girl's refusal to go out with him while he was in school and — with the input of the female backup singers — setting his agenda as taking government back from "people who think about things" and this land back from "the Indians, the French and Spanish, and other people in other European countries? I'm pretty sure it's our land anyway." Or so it is when you listen to the original Broadway cast album. Clarity is not so readily available at 650 E. Stonewall St.

Decker & Co. definitely haven't compromised the greater rock virtue of audibility in specially reconfiguring the Actor's Theatre stage for this production. The usual stadium seats have been radically abbreviated, and with the mainstage jutting forward in a thrust configuration, two new banks of seats have sprouted up to flank the players. We feel closer to the action because the rows of seats have been split in three and because the action flows out more freely into the aisles, sandwiching us. Borderlines between actors and musicians are similarly broken down in Decker's magnificently rustic set design, where the band mostly lurks upstage — unless members of the power trio step forward. Or they're joined by guitarists Jeremy DeCarlos and Matt Carlson, when they can moonlight from their respective chores as Black Fox and John Quincy Adams.

On his backwoods landscape, Decker initiates a convivial party vibe in a pre-show that is probably close to the ideal envisioned by the producers of the current run of Once on Broadway. Then he shuffles role assignments so thoroughly that the Broadway playbill is little help in sorting out which supporting players are singing or playing what. Nor does the inclusion of a faithfully reproduced list of musical numbers help matters much, since the cast list has been purged of basic ID info such as who is Adams, Henry Clay, Martin Van Buren, James Monroe and John C. Calhoun, let alone Mysterious Female. With a third of the cast totally new to Charlotte, I'd still be on the phone sorting things out if it weren't for the saving grace of the headshots included with the cast bios.

The most startling headshot is of Bo Broadwell, who looks as wholesome as Mister Rogers in the playbill yet makes a stunning debut as Bloody Andrew. If Jackson isn't exactly subtle, he is complex. The staunch slaveholder mightily opposes South Carolina's secessionist move in the Nullification Crisis during his first term, and while he was perhaps the most potent poison for Native Americans in our history, we see him adopting a Native American, Lyncoya (Lorcan Douglas), as his own son. Broadwell beautifully enfolds these contradictions into his punk persona and makes them cohere.

Rolling onto the stage at regular intervals as our Storyteller — and regularly taking fire from her anti-intellectual, trigger-happy hero — Jennie Greenfield reliably injects comedy into the proceedings whenever she appears. Reviving memories of her recent turn in La Ronde, Nicia Carla turns Jackson's wife Rachel into a slatternly temptress. They did commit bigamy to wed, sufficiently justifying this deliciously déclassé portrayal. Listed among the Ensemble, newcomer Mikaela Fleming steps up to solo on numerous occasions, most notably in "Ten Little Indians," a sobering countdown to genocide.

DeCarlos ably supplies the remainder of the gravitas as Black Fox, a Jackson confidante who betrays a portion of his people in order save other tribes, including his own — until the superstar's megalomania becomes too much. Joe Rux is scandalously effete and subservient as Van Buren, the Jackson rival who becomes his VP, disdaining a wig with an outrageously frizzed hairdo, a simpering riot every time he dons VB's gilded waistcoat.

Rux also supplants Decker in giving the opening curtain speech, probably because it's too too freewheeling and loaded with profanities for an artistic director of a respected professional theater company to soil himself with. But it definitely gives us fair notice of what we're in for, a punkish advisory to fasten our seatbelts. Reverence and propriety will be tossed to the winds, and in yielding to it, we become implicated in the joy and horror of the "sometimes you have to kill everyone" American Experience.