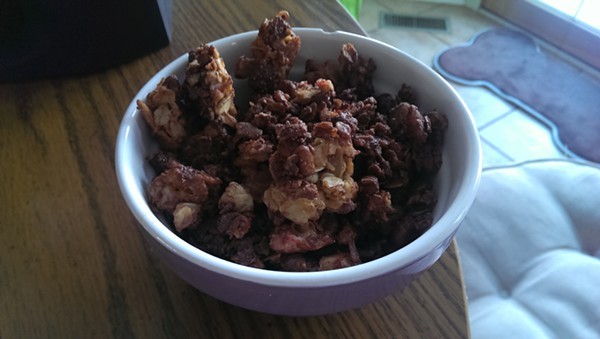 Granola has a reputation. You know this. I know this.

Hell, it's even corrupted the word "crunchy," a word that's gone from making me think of delicious over-battered fried chicken and candy bars to a sad-looking man who hand-picks his own flax seeds and complains about people who don't hand-pick their own flax seeds.

And that makes me sad, dammit! Granola doesn't have to be just seeds and fruits and non-GMO organic nature things some guy named Ampersand found in a field. Granola doesn't have to be moral. It can just be some oats and sugar and maybe a few pecans. It should be about tasting good, not about feeling superior to someone just because they want to have a waffle for breakfast and not a giant bowl of antioxidants.

Also, I love the shit out of peppermint.

Get yourself a small pan, pour the sugar and water into it, and heat it up on medium.

Give it a stir, then start unwrapping four of the candy canes, which is definitely not a complete pain in the ass (seriously, candy cane companies: it's supposed to be a family-friendly holiday treat, not a deleted scene from Saw), and break the canes into pieces.

As the pan heats up, add the candy in and continue stirring until the candy is completely melted in. If the liquid starts to bubble, TURN THE HEAT DOWN. You'll end up with a delicious hunk of peppermint sugar rock instead of syrup. Still delicious, but absolutely useless.

Set the pan aside to cool to room temperature while you do things with oats.

This part's easy: just add the oats, pecans, coconut, olive oil, brown sugar, salt, and 3/4 cup of the peppermint syrup (once it's done cooling) to a large bowl, and stir. Easy. And don't worry, the olive oil's there for texture, not flavor. The olive-ness gets cooked out, so you won't have something that tastes like a peppermint breadstick on your hands.

Spread your pre-granola out on a parchment-lined baking sheet, and stick it in the oven for 15 minutes.

While it's baking, crush the other four candy canes in TWO large plastic bags with a rolling pin. That's two bags. Not one. Unless you want candy cane dust to get all over your kitchen and embed itself in your feet. Your call.

After the first 15 minutes, give the granola a stir and put it back in the oven for another 15.

Add the candy cane pieces into the granola, and put it back for yet another 15 minutes (that's 45 minutes total, folks).

While the granola's getting all nice and toasty in the oven, melt your chocolate chunks either in a double boiler or in an oven in 15-second intervals.

Take the granola out, let it cool for 5 minutes, then drizzle the chocolate on top and let it cool to room temperature. Break it all up with a wooden spoon, put it in the nearest handy container, and shovel that goodness in your mouth.

Shovel some beats into your ears, too, with this week's track from the one and probably only Kanye West. It's Christmas in Harlem:

Granola's a lot of things, but let me tell you what it's not. It's not a banner in a vegan rally. It's not a way to protest Monsanto. And it's not a lifestyle. You know what granola is? A food - a thing you eat with your mouth. That's it.

If you believe in all those things, I'm happy for you. I'm not saying I don't believe in those things. What I am saying is that if you want to live one of those lifestyles, I don't want to be the one to stop you. Nobody should. Just leave my granola out of it, dammit. Politics ain't an ingredient, last I checked.

I'll see you fine folks next time. And happy holidays.