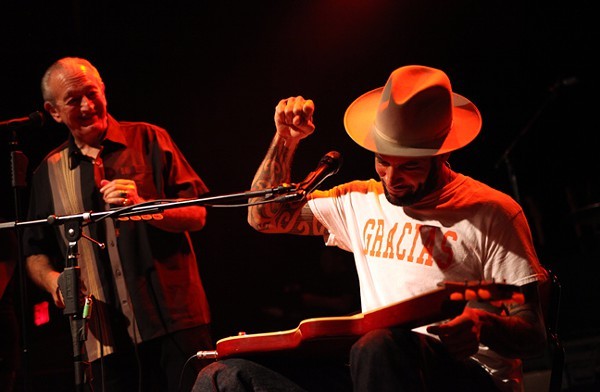 A little more than an hour into his blistering set of raw and meaty blues Sunday night at the Fillmore, singer, songwriter and blues acolyte Ben Harper turned to the grizzled elder statesman who sat next to him on a stool in a black bowling shirt with gray stripes, harmonica in hand.

"Not only are we going to play a Muddy Waters song right now," Harper told the packed house, "but this guy sitting to my right and to your left actually played the song - with Mud."

The extended jam that followed answered a question Harper had posed earlier in the evening: "Is the blues still alive and well?" It certainly was on this stage in Charlotte, as the 43-year-old singer/songwriter traded gritty licks on his signature Asher lap steel guitar with venerable blues-harp vet Charlie Musselwhite, the 69-year-old Mississippi native who followed the blues trail up to Memphis and then on to Chicago before beginning his recording career in 1966, three years before Harper was born. 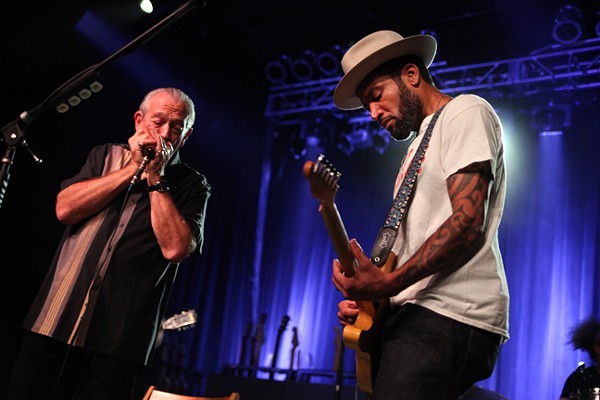 In their two-hour performance, Musselwhite, Harper and the Relentless7 band - guitarist Jason Mozersky, bassist Jesse Ingalls - and touring drummer Jimmy Paxson mostly played songs from their recent collaboration, Get Up!, revving the engine on the dubby, bass-heavy title track before firing on all cylinders with the wailing single "I Don't Believe a Word You Say." The latter song was the first among many that brought the house down, including the Muddy Waters-like riffage of "I'm In I'm Out and I'm Gone," the chunky, ZZ Top-ish "Blood Side Out," the aforementioned Waters cover, "Long Distance Call" and a bold reinterpretation of Led Zeppelin's "When the Levee Breaks" that had Harper aping Robert Plant's shrill falsetto.

Musselwhite didn't just sit idly by, blowing his harp as the band played Dixie on this mild Southern night. He also lent his ragged vocals to a few songs, bringing a smoky, blues-bar edge to the proceedings with his own "The Blues Overtook Me," from his 1990 album Ace of Harps, and "I'm Goin' Home," from Curtain Call in 1982. He traded vocals with Harper on "Homeless Child," bringing a richer sense of world-weariness to the ancient-sounding country-blues track from Harper's 1997 album, The Will to Live.

At a Ben Harper show, the audience is often as interesting as the performance, as his adoring fans banter with him and sing along loudly to nearly every song. At one point, even your trusted reviewer's wife, Tarrah, became part of the performance. In the quiet space of "Don't Look Twice," after Harper sang, "You know it's bad when the ceiling says to the floor...," Tarrah finished the line by yelling out, "I'll trade you places; I can't take it up here no more." (Disclaimer: Tarrah is one of those crazed, diehard Ben Harper freaks; her enthusiasm, however, had no bearing whatsoever on the content of this review. Thank you. ;) - MSK)

After "Don't Look Twice," Harper - sporting a tan vagabond fedora and white T-shirt emblazoned with the word "Gracias" in bright orange letters - asked the audience, "Should I keep the beard or no?" He was referring to his new chin hair. The crowd answered in the affirmative, naturally. Then he continued: "I miss my hair, too, but you know, nature takes its course. Bald is the new hair." Actually, he's hardly gone bald; his hair was merely buzzed short.

Harper pulled another song from his earlier catalogue, "When It's Good," a sweet, slide-fueled hand-clapper from his 2003 disc Diamonds on the Inside. But this tour is more about his band's collaboration with the great Musselwhite and Harper's longstanding love affair with the blues than about Ben Harper, the singer/songwriter. And if Sunday's performance is any indication, he's more than gained his bona fides. 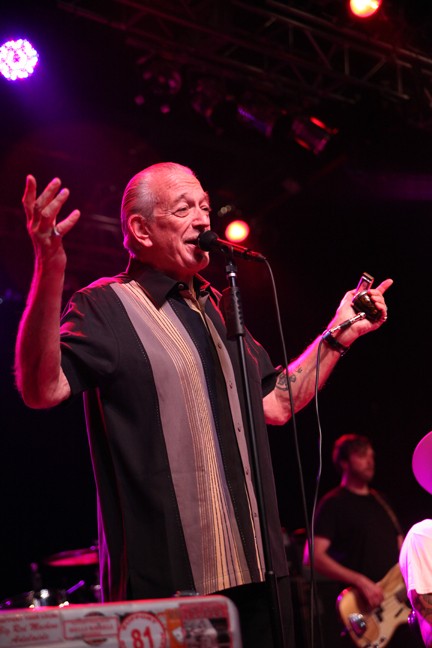 Setlist
Get Up!
I Don't Believe a Word You Say
The Blues Overtook Me
Don't Look Twice
When It's Good
She Got Kick
I'm In I'm Out and I'm Gone
Blood Side Out
Homeless Child
I Ride at Dawn
I'm Goin Home
Long Distance Call
When the Levee Breaks