My day got started at noon with The Head and the Heart. They're one of those buzz bands that's hitting most major music publications these days, and the first few songs proved them right. The band has solid songwriting, good vocals and just a great vibe. I'll be looking forward to hearing more from them.

I next went to catch the Smith Westerns and wasn't impressed. The indie rockers from Chicago appeared a little bit bored. The music lacked anything to grab onto and keep me interested.

There came a point, now that I'm in my fifth year covering Bonnaroo, when I decided that my goal in coming to the festival was to: a) see as many bands as I could, b) see as many new bands as I can while still checking out favorites and c) giving up on some favorites for unique opportunities.

Every year, I leave with a handful of bands that I know I want to hear more from. There are always a couple that I "eliminate" from seeing again and there are some regrets that I just live with. For example, I didn't go back to try and see Dr. John last night - but I plan on seeing him in tonight's Superjam. I skipped The Black Keys, having seen them at least three times before, in order to see, for the first time, Bootsy Collins. I missed a good bit of Buffalo Springfield for the opportunity to take photos of Eminem.

I'll start from the beginning of the day with what I did catch though. My day got started with the Neil Young-esque rock style of Alberta Cross. It was actually at Bonnaroo a couple of years ago that I discovered the band and was glad to see that they're still as solid.

The 2011 Bonnaroo Music and Arts Festival might be winding down, but that doesn't mean the talent is any weaker than it has been. Sure, the heat has taken its toll on the energy of many 'Roo-sters, but there's still plenty of good stuff left to see.

The day will get started with The Head and the Heart. It's one of those buzz bands that's been on my radar for quite a while. I'm interested to see how it all comes together live. They're in The Other Tent at noon.

I'll be heading to The Other Tent at 1:30 to catch former Charlotte resident Nicole Atkins.

Neon Trees will hit This Tent at 1 p.m. And I'm interested in seeing Galactic on the big stage at 3:30 p.m.

The afternoon is where the choices are tough. 4:30 p.m. brings a triple-battle between Iron & Wine, Gregg Allman and Robyn. Then Cold War Kids start at 5 p.m.

6 p.m. will have Robert Plant & Band of Joy on the main stage, but then another tough choice lies around the corner.

The Strokes start at 6:45, as does Explosions in the Sky. Beirut went on at 6:15 p.m. and the Superjam featuring Dan Auerbach and Dr. Jon starts at 7.

The night will end with Widespread Panic hitting the main stage at 8:30 p.m.

Half of Bonnaroo is now over, but that doesn't mean we're on any kind of downhill slide.

That Tent starts the day off at 12:15 p.m. with the bluesy rock style of Alberta Cross. If you're looking for something a bit more upbeat, you can check out the reincarnated funk/James Brown-style of Black Joe Lewis in This Tent at 12:30 p.m.

There's a Rolling Stone magazine cover battle going on between Lelia Broussard and The Sheepdogs at This Tent at 2 p.m.

Deer Tick, Alison Krauss and Portugal. The Man will help fill the mid-day hours before Wiz Kahlifa hits the What Stage at 5:50 p.m.

Mumford & Sons is sure to draw a large crowd to its 6:15 Which Stage performance — a big step up from the tent they played last year.

Bootsy Collins is set to bring the funk to the Other Tent at 7 p.m.

The night's headliners get started with The Black Keys at 8 p.m. on What Stage. The highly-anticipated set by Buffalo Springfield is at 9:30 on Which Stage. Then it's back to What for Eminem at 11 p.m.

The late night sets get started with Dr. John and the Meters reviving their album Desitively Bonnaroo at 12:30 a.m. in That Tent.

The real parties get started even later when Gogol Bordello wraps up The Other Tent at 2 a.m. and Girl Talk hits This Tent at 2:30 a.m.

It's sweltering here on the fields of Manchester, Tenn. The plan to open gates for campers on Wednesday night appears to be a huge success — not only because there were no lines to get into the festival, but also because there were a hell of a lot more people here to see all the bands.

By the time the tents started, there were large crowds soaking up every moment of sun and music. 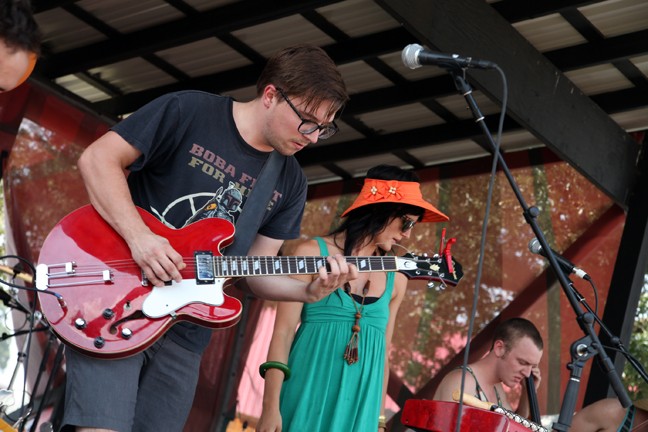 My day got started around 2 p.m. with the Kopecky Family Band drawing a large crowd to the Solar Stage. The band often plays the Muse, but was playing to a much larger crowd here.

Friday at the farm is going to get started with a 12:15 p.m. set by Jessica Lea Mayfield in This Tent. Her brother, David Mayfield is set to perform with her — he'll have a set of his own on Saturday.

The blues-infused metal of Graveyard will start the day off in That Tent at 12:30 p.m. while the cello-infused style of Ben Sollee will kick off The Other Tent at 1 p.m.

That Tent keeps the metal theme going with Kylesa at 1:45 p.m.

It's a tough choice to make at 3:15 p.m. as Grace Potter hits the main stage, What, while Matt & Kim venture into This Tent.

Abigail Washburn and Warren Haynes will hit the Other Tent and Which Stage respectively at 4 p.m.

Once The Decemberists hit at 5:30 on the What Stage, that's when things heat up and people will have to make their choices wisely.

Ray LaMontagne is on at 6:15 p.m., while one of the largest tent crowds of the day is expected for Florence and the Machine at 6:45 p.m. in This Tent.

The night's main stage festivities kick off at 8 p.m. with the highly-anticipated show by My Morning Jacket. Any legendary jams are somewhat canceled by the fact Arcade Fire will hit the same stage at 11 p.m.

While many fans will hit The Other Tent looking for Big Boi at 12:45 a.m., the Which Stage will see Lil Wayne starting at 1:30 a.m.

But that's not all - the Tents aren't scheduled to shut down until after 4 a.m.

As the 2011 Bonnaroo Music and Arts Festival gets ready to kick off on the fields of Manchester, Tenn., here's a quick rundown on Day One/Thursday.

With the campgrounds opening up on Wednesday instead of Thursday morning, there's going to be plenty of people on site by the time the music kicks off.

Things get started in the main music tents with River City Extension at 4 p.m. in This Tent.

Futurebirds will start things in That Tent while Hayes Carll gets it going in The Other Tent.

There's a lot of excitement surrounding the 5:45 p.m. show by Karen Elson in The Other Tent, as hopes are high that her husband, Jack White, might show up on stage.

While The Knux get hip-hop going in This Tent, School of Seven Bells will be in That Tent and Best Coast will be rocking the Other Tent in the early evening.

10 p.m. brings another tough choice with Twin Shadow and The Walkmen on at the same time, and Sleigh Bells starting 15 minutes later. Meanwhile, in the Comedy Tent, Henry Rollins will be making his only scheduled appearance of the weekend.

The night wraps up with the pairings of Childish Gambino in This Tent, Beats Antique in The Other Tent, Deerhunter in That Tent and Cheech Marin hosting the Comedy Blaze.

Thursday is always a quick, scattershot day with a handful of up-and-coming names mixed in with some great buzz bands. It's going to be a great warm-up for a packed weekend schedule.

Sunday started out with a quick interview with the bluegrass/Americana trio The Lovell Sisters. Though they're young, the band has been together for five years and built a solid foundation at Merlefest. They performed at This Tent to open the day there.

A.A. Bonday had a folk set in The Other Tent while Cage the Elephant tore up That Tent in what amounted in the first of a number of metal shows there. (The Dillinger Escape Plan, High On Fire, Shadows Fall and Coheed and Cambria played later.)

I gave a quick rundown of Saturday, but here are a few more details - and then I'll get into Sunday in Part 2.

Buffett looked like a late addition, but at a press conference shortly after his performance, he said that he knew for about six months that he was likely to perform at Bonnaroo. It may have been billed as a Ilo and the Coral Reefer Allstars show, but it was basically a Buffett show - in the daytime.