Millennials Get Medieval on Your Asses

Millennials get a bad rap. Maybe that's because so many loudmouthed Baby Boomers and GenXers, fearful of losing their positions of power to younger people, are still out there in large numbers, stalking social media like rabid dogs, gnashing their teeth and complaining about how all millennials are "arrogant," "entitled," "rude," "lazy," "disrespectful of their elders," etc., etc. Whatever it is, it's time we put an end to that foolishness once and for all.

That's what this year's Best of Charlotte aims to do.

In 2017, millennials in this city stood up to firmly and emphatically seek to share the reins of power — in the arts, government and elsewhere — showing haters that young people not only care, but are passionate about creating and nurturing a better Charlotte and better world than the one they've inherited. And this year, Creative Loafing says "thank you" to those millennials in the form of several Best of Charlotte categories, from the stage to the political stump. 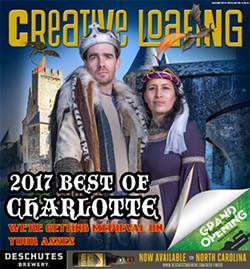 Not only do we honor Charlotte Uprising activist and city council candidate Braxton Winston as Local Hero, and young Indian-American city council member Dimple Ajmera as Best New Politician, but we've created an entirely new category for the wave of other young Charlotteans who threw their hats in the political ring this year, determined to bring millennial interests to the fore in this city in 2018. That category is Best Hope for the Future, and it goes out to each and every hard-working millennial out there fighting for what they believe in, regardless of what end of the political spectrum they occupy.

And as we do at Creative Loafing each year, our staff and contributing reporters and critics also honor numerous local visual artists, musicians, performing artists and others, as well as local music venues, nightclubs, shops and restaurants.

One local millennial musician honored this year is singer-songwriter LeAnna Eden. After I returned as CL's editor in late 2016 following a few years away in the San Francisco Bay Area, one of the first things I did was sit down with Eden for a cover story on her and her band, LeAnna Eden and the Garden Of. I had seen the band perform an acoustic set while visiting Charlotte earlier that summer, and was knocked out by Eden's voice, her songs and her passion for both social justice and propping up other young Charlotte artists of color.

Shortly after that show, Eden sent me a video of her then-new track "The Protest Song," wherein she sang of the spate of police shootings of black people that had culminated in uprisings across the U.S., including the one here in Charlotte in the wake of the Keith Lamont Scott killing. "Don't give up," Eden sang in the video, "so many reasons to cry. We all know it's time to stand up and fight."

Eden has been standing up and fighting ever since, and 2017 was a banner year for the singer. Not only did her band release an impressive debut EP featuring five powerful indie-rock tracks that delivered on the promises she had hinted at in "The Protest Song" and earlier solo acoustic releases, but she has actively supported her fellow Charlotte artists by launching two regular showcases — Session: A Listening Party, at Petra's, and Hip-Hop Wednesdays, at Common Market — and the Bla/Alt Music Festival, an Afropunk-like event showcasing local and regional black alternative artists.

For those reasons and more, our critics' choice of LeAnna Eden and the Garden Of as the Best Band of 2017 was a shoo-in.

Other 2017 Arts & Entertainment winners are just as deserving for many of the same reasons. Charlotte artist Mark Doepker, who was assaulted by a racist for a 3D cube he displayed atop his car in support of "Black Lives Matter," wins Best Political Artist in this year's awards. Prolific sketch artist Hannah Barnhardt wins Best Documentary Artist for her terrific drawings of musicians and denizens of local hangouts like Hattie's, Amelie's, Common Market and Snug Harbor. And Marcus Kiser wins Best Afrofuturism Artist for his poignant depictions of the inner feelings of black characters set in the expansive loneliness of outer space.

CL doesn't get the final word on the best of Charlotte, though, so check out the readers' choices, too. While some of your picks dovetailed with ours, others didn't. Both readers and CL staffers alike voted Amigo the Best Country (or folk or Americana or whatever) band, but readers were more enamored with indie-punk band Dollar Signs — which CL wrote about in March following the release of the group's EP Life is Ruff — than with LeAnna Eden. We all agree, however, that Snug Harbor is one of the best places in the city to see great music.

As you peruse all the categories, keep this in mind: There's a reason we chose Game of Thrones as our theme. It's because we see a culturally diverse world in moral conflict, with young people reaching for the helm of leadership and faced with some serious moral dilemmas. We think young Charlotteans of all shapes, sizes, races and gender identities are not just up for the challenge, but they're prepared to begin setting things right in 2018.

Thanks to everyone — our writers, artists, sales folks and especially, our readers — for helping make this year's Best of Charlotte pop. Now, let's party!