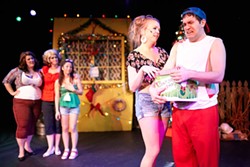 With the invention of Santa, Sears, Macy's, Wal-Mart, Amazon, Black Friday and Cyber Monday, we can confidently proclaim that the shelf life of Christmas as a religious holiday in America has passed. Indeed, the expiration date — when Christmas in the USA became a commercial package was probably stamped into history decades ago. So why was I surprised to find that The Great American Trailer Park Christmas Musical, now at Actor's Theatre through Dec. 28, descends to new depths of tackiness, tastelessness and outright raunch for a Yuletide musical?

Probably because the show, written by Betsy Kelso with David Nehls and directed by Chip Decker, conclusively demonstrates that prevailing attitudes have a long way to go before we reach maximum irreverence and sacrilege toward the holiday. We revisit Armadillo Acres, the Kelso/Nehls concoction that first invaded East Stonewall Street in 2008. Turnover is rife at this Northern Florida trash heap, so we don't get the same set of characters as the summery Great American Trailer Park Musical, where Wesson Oil was the suntan lotion of choice.

Returning to the scene of the comedy are the park manager Betty, unwed mother Pickles and the prodigious Lin, née Linoleum, the pitiful widow of an ex-con who has done some prison time herself. With tattoos to prove it. Newcomers to the park are Rufus Jeter, the redneck handyman and the drop-dead gorgeous Darlene Seward, who absolutely despises Christmas — underscoring her sentiments in a raucous "Christmas Is for Dummies."

Now this is a problem for the Armadillo Acres community. They're expecting a visit from a representative of Mobile Homes & Gardens, and their shot at winning the not-so-fabulous prize money for best holiday decorations is riding on the outcome. Darlene refuses to allow anyone to decorate her trailer, so I guess the pile of tin she's living in must actually belong to her.

Veneration for Christmas at Armadillo Acres is venal and not at all religious. Nor can we be offended by Darlene's revulsion, for it stems from a personal tragedy, the loss of her biker boyfriend on Christmas Eve some years earlier. The strongest trace of religious sentiment or spirituality among these déclassé Floridians is Betty's notion that a demonic curse hangs over the park. Turns out to be true!

Strong currents of sexual attraction are unleashed as the Christmas decorators struggle against Darlene's defiance. Outraged by her neighbors' presuming to decorate her trailer, Darlene reaches into the nest of wiring that Rufus has rigged to the offending Christmas lights. Big electro-shocking mistake. Darlene's resulting amnesia is so profound she even forgets, amid that same mighty tangle of wires, Rufus has been pirating her cable TV.

The spark of romance is lit between Rufus and Darlene, but how long can bombshell's infirmity last? Doesn't help that her forgotten beau — and boss — Jackie Boudreaux shows up at the park to find out why Darlene is AWOL from her job at Stacks Pancakes. He's a mean dude with muscle to match his seedy swagger, and his next enterprise is a string of "breasterants."

Decker didn't direct the original Trailer Park Musical, but he designed the set, and he returns to that task with gusto. Along with the requisite beer-can wreath to adorn Darlene's trailer, there's another one made of Marlboro cigarette boxes next door, a nude lady on a mud flap crowning the park Christmas tree and a truckload of flamingoes and kitsch strewn everywhere.

So yes, Carrie Cranford and Tyler Mitchell's costume designs can be as outré as everything else. You're not imagining that "Christmas for Dummies" has a kinship with "I Hate Christmas" in Scrooge!, for Darlene's amnesia becomes an excuse for a dream-memory sequence spoofing Dickens' Christmas Carol — and an opportunity for some extravagant ghost costumes for Pickles and Lin. And when three backup singers just aren't enough, Rufus and Jackie change into some glitzy drag to join in.

Lauren Neely makes a sassy local debut as Darlene, as obdurate as the iconic Ebenezer before her shock therapy, yet with a softness that emerges naturally from that hard shell when she sorts out who she really is. She also clicks effectively with Ryan Stamey, considerably mellowed as Rufus from the Sharpie-sniffing wildman he portrayed in the original 2008 Trailer Park. I almost wished he'd gotten a jolt from those electric wires himself instead of playing the importunate lover, but after his splashy cross-dressing stint, Stamey breaks out again deep in Act 2 with "Black and Blue on Christmas Eve."

It's Grant Watkins who gets in the most charismatic licks — and pelvic thrusts — as the sleazy, bullying Jackie, promising his whole Stacks staff that "Baby, I'll Be Your Santa Claus." Amid this macho posturing, his hirsute cross-dressing is a special treat. Among the women, Cassandra Howley Wood's transformation as Pickles gets the most comedy mileage, for she repeatedly flaps around the stage in the dream sequences, never quite achieving balletic grace. Tod A. Kubo is the culprit for all the choreography.

Sporting an ugly sneer and the biggest voice in the cast as Lin, Brianna Smith brings her considerable acting prowess into unexpected new territory, making me wish that Kelso had written more for her. But she does moonlight as a puppeteer — and she plays a mean pair of spoons. With Wood on jug, Lisa Smith Bradley completes the jug band on washboard, her best break from the role of Betty, who amazingly emerges as the most normal person we see onstage. Bradley wisely makes this park manager and her devout belief in the curse into a hayseed parody of wholesomeness.

Like A Tuna Christmas, this Christmas spinoff of Kelso's Trailer Park isn't as sturdy as the mother ship, but it's likely to prove more marketable. As served up by Decker and his talented cast, it certainly boasts more chutzpah.

Ten years older than the last time he played the title role, Steven Ivey stars at ImaginOn in Scrooge! So Ebenezer fits him more like a glove than ever. Ivey is so mean in the opening scenes where he tyrannizes over Cratchit, spurns his nephew's Christmas dinner invitation and terrorizes his delinquent debtors that my wife Sue had to chastise me for laughing.

The Children's Theatre production, directed by Ron Chisholm, is flawlessly crafted without a single weak link in the cast. Scott Miller is pure worm as poor Bob, Beau Stroupe is as fearsome as any Marley I've seen, Stephen Seay is a veritable leprechaun as Ebenezer's nephew, and Chaz Pofahl — on platform shoes! — is very nearly Robert Goulet as Christmas Present.

I tend to hold my breath when children borrow the spotlight from adult professionals onstage. But with Elly Hughes as Tiny Tim and the precocious Meg Crosbie as Christmas Past, I could exhale with complete satisfaction.