Now, that doesn't mean I don't believe in eating healthy. If you spot yourself a nice-looking quinoa salad or some roasted vegetables, by all means, point your fork firmly in that general direction. But don't just do it because the calorie counter on your iPhone's going to yell at you if you don't - do it because both those things are damn tasty.

Similarly, if you're gonna eat something filled with cheese and fat and deliciousness, don't sully the recipe by trying to "make it healthier." The reason why someone makes a cupcake the size of your face covered in frosting and caramel is because it's supposed to be obscenely delicious. It's called an indulgence because you're supposed to indulge, not so you can substitute the sugar for rehydrated sweetener substitute or some such nonsense and feel a slightly better about yourself.

Not only is that probably not going to be that much healthier, it's cheapening the recipe. It's making something that should be a heart-stoppingly delicious morsel into something that's just an imitation. Sure, it might remind you of the real thing; it might even resemble it. But in the end, it's not the real thing, just by virtue of you changing it in the first place. It's a phantom.

So if you're gonna eat something ridiculously unhealthy, eat it. Don't hide behind a mask of low-fat or low-calorie or "it tastes just as good, I swear!" Just. Eat it.

Directions:
Most chicken salad recipes out there call for you to get a giant pot of water and boil the ever-loving crap out of your chicken. And that's bullshit. Not only does it make the chicken flavorless and grey, but it also turns it into a delivery device for a bowl of mayo and grapes. The damn dish is called chicken salad; why would you half-ass the most important part?

So we're going to roast our chicken instead.

Start by heating up your oven to 500.

Get yourself a roasting pan and put a rack in it. If you don't have one, you can roll up a crap-ton of aluminum foil and make an S shape out of it. Just make sure the chicken isn't touching the bottom of the pan. Use some old hurricane siding or car parts or something, I don't really give a crap.

Put the chicken on your rack (or rack-like thing) in the pan and stick it in the oven for 20 minutes.

While that's getting all nice and crispy, whisk together your olive oil, herbes de provence, salt and pepper. 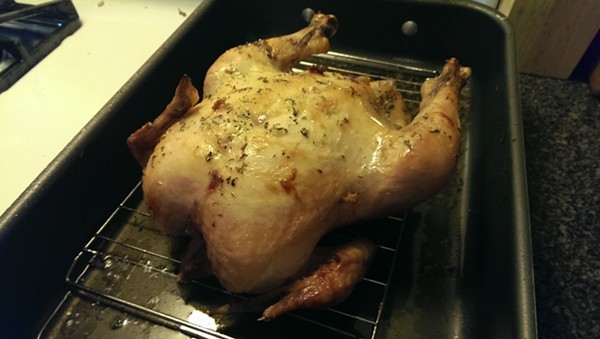 Take the chicken out after the 20 minutes is up and pour half of the olive oil mixture over the top of the bird. Make sure it covers as much surface area as possible, but don't be an idiot and try and rub it in with your hands, unless you like having severely burned hands.

Turn the chicken over and pour the rest of the olive oil mixture over that side, then stick it back in the oven for around 8 minutes. If it's beginning to brown, you're in good shape; if it isn't, let it roast for a couple more minutes.

Lower the heat to 325 and keep roasting for about 30 more minutes, or until a meat thermometer reads 160-165. Make sure you check the juices before you take it out as well: if you tip the chicken and red liquid comes out, that's bad. Generally you don't want to be eating anything that's bleeding unless it's a a steak, so if you see red, put it back in the oven for another 5 minutes.

Let the chicken rest on a plate for 5 minutes, then carve it up and put the meat in a big bowl.

Next comes the actual salad part. Or as much as you can call a chicken covered in mayo a "salad."

Get a small pan and put it on medium-high heat. Once it's warmed up a bit, chop up your walnuts, pour them in, and let them toast. They should be done after a couple of minutes; just look for them to just start getting browned. Or just smell them - they'll smell toasted. This ain't rocket science, people.

Chop up the stuff that needs chopping, mincing or whatever other kinds of knifing you can think of. Make sure you get that shallot and tarragon extra fine; nobody wants to be picking crap out of their teeth here.

After that, all that's left is to mix the rest of the ingredients together with the chicken and mix it up. Oh, and make sure you let the chicken salad cool off in the fridge for a few hours to let those flavors start introducing themselves to each other. Think of it as a nice little party that ends in your intestines.

Toast up a couple of slices of that bread, put some chicken salad in the middle and dig the hell in. Make sure you get the bread just barely toasted, that way you'll have a soft, warm compliment to that cool salad.

And speaking of cool compliments, check out this week's track. It's I'll See You In My Dreams from the Dick Hyman (cue grade-school snickering) Group, featuring Howard Alden:

I understand a lot of people are gonna be up in arms about this whole thing. I get it. But the biggest problem with food these days is that people aren't willing to appreciate their food for what it is, and that's a damn tragedy. If you want a brownie or a chicken salad sandwich, HAVE IT. Have it exactly the way it is and was and should be, and that's covered in mayo or filled with fudge.

If you want something tasty but still want to follow your Atkins/Paleo/Whatever Diet, there's some delicious fruit and kale recipes out there with your name on it. Just make sure you keep your damn hands off my chicken salad.